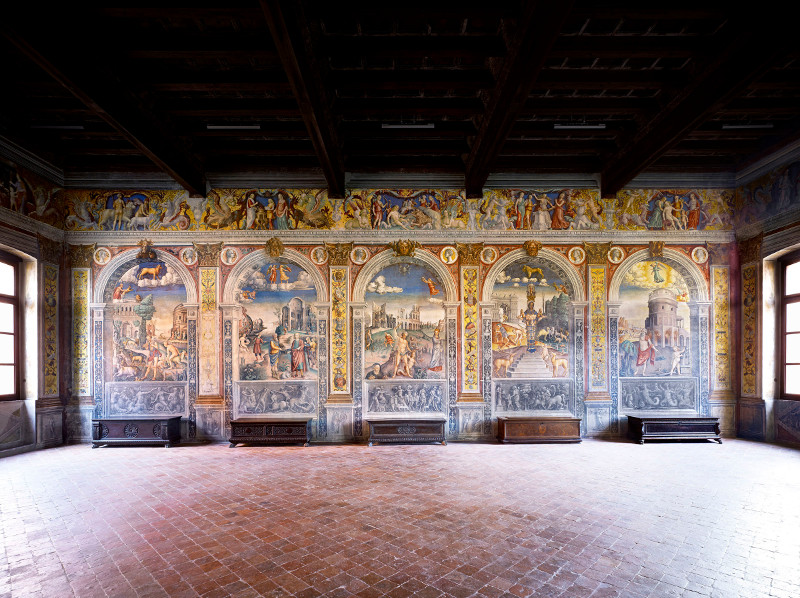 At present it is in preparation, but the itinerary called “Archaeology of the Mantuan Territory” is already prepared. The collections include some neolithic finds, such as the famous “Lovers of Valdaro”, together with many other finds of the Bronze Age, of the Etruscan, Veneti, Celtic and Roman civilizations, medieval and renaissance objects all coming from the Mantuan area.

The Egyptian Collection “Acerbi” and the Mesopotamian Collection”Sissa” TheEgyptianCollection, composed of more than 400 finds, shows many valuable pieces, such as the little bronze statue of the cat divinity “Bastet” and the little wooden statue of the dog divinity Anubis, the custodian of the tombs.
The Mesopotamian Collection shows about 200 objects; among them some prehistoric tools, arrow heads,fragments of painted vases, little statues of divinities, talismans and some valuable small clay boards written in the ancient Cuneiform language. All the finds come from the area of the rivers Tigris and Euphrates and date back to 4000 a.C. to 1200 a.C.

The towers of Mantova are still standing out to tell their story; for many centuries they were symbols of power and prestige, buildings of public utility and prisons. The visit in the city centre includes the four towers of the castle of St. George, the tower of St. Aló, the tower of the Cage, the Civic Tower in Broletto square, the tower of the Clock in Erbe square and many others.

This itinerary is a visit of the most significant places of the works and the life of the painter Mantegna: the Bridal Chamber in the Castle of St. George, the church of Santa Maria della Vittoria, the funeral chapel in the Basilica of St. Andrea, Mantegna’house, designed by the painter himself and the house of his daughter Taddea.

The visit includes the places and works by Giulio in Mantova, such as “Corte Nuova”in Palazzo Ducale, the cathedral, the Pescherie, the artist’s house in via Poma and Palazzo Te, Giulio’s masterpiece.

A route which includes the visit of:
– Palazzo d’Arco, the residence of a noble family, still keeping, in the rich furniture and in the precious art gallery, the same aspect of its great past. The Room of the Zodiac was painted with an important fresco by Giovani Maria Falconetto in 1520.
– Teatro Scientifico,designed by architect Bibiena in 1767 and inaugurated by young Amadeus Mozart aged 13.
– Biblioteca Teresiana, a library founded by emperess Maria Theresia Habsburg and opened to the public in 1780.

Religion and Devotion in Mantova

The visit includes:
– Diocesan Museum, where the treasures of the Mantuan diocese are kept. In addition to the precious objects of sacred art, you can admire many paintings from XV to XVIII century and a famous collection of armours of 1400.
– Sanctuary of Santa Maria Delle Grazie, built on the shores of Lake Superiore at the beginning of XV century to venerate the ancient image of Mary the Virgin. Inside the church, an unusual wooden framework is divided into niches where many votive statues are exhibited.
– Abbey of San Benedetto Po. It was founded in 1007 by Tedaldo di Canossa (grand-father of countess Matilde ). It is still keeping the witness of the romanesque buildings, of the gothic church of 1400 and the renaissance aspect designed by Giulio Romano. In the Refettorio Grande you can see a huge fresco attributed to Correggio.